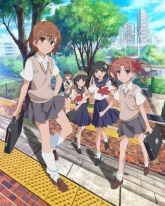 Based on the Toaru Kagaku no Railgun manga written by Kamachi Kazuma and illustrated by Fuyukawa Motoi, which in itself is a spin-off of the light novel, manga and anime series Toaru Majutsu no Index.Academy City is the home to circa 2.3 million citizens, about 80% of whom are students working to develop psychic powers and advanced technology. Students are ranked according to levels corresponding to their psychic powers: those without any are ranked at Level 0, and those with some manner of powers progress from Level 1, the weakest, to Level 5, the strongest. Only seven students in the whole city are ranked Level 5, and these seven are ranked among themselves as well.Electro-master Misaka Mikoto is a headstrong Level 5 esper, ranked third in the city. Her perverted and passionate roommate, Shirai Kuroko, is a Level 4 Teleporter and a member of law enforcement and public safety corps Judgment. Uiharu Kazari is Kuroko's shy Level 1 partner at Judgment and a specialist at hacking and information gathering. Saten Ruiko is Kazari's mischievous friend who has a habit of flipping the latter's skirt to find out what color of underwear she is currently wearing, much to her chagrin, and a Level 0.In this city where supernatural powers abound and urban legends are an integral part of daily life, there is never a dull day, and things are about to get more exciting again, not necessarily in a desirable way. The latest and greatest urban legends talk about money cards hidden all over the city and some mysterious project that involves clones. Having once agreed to cede her DNA map to a research that aimed to cure a form of muscular dystrophy, Mikoto isn't any pleased to hear about that project, fearing that these clones may be hers.She sets out to investigate the case, and her preliminary results show that she was indeed considered for the project, but the city's supercomputer, Tree Diagram, indicated that her clones would be far weaker than herself. Mikoto is relieved, but not for long, as she is about to discover many sleep-depriving truths about the cloning project. Meanwhile, just what are those money cards about, and, more importantly, are they anyhow related to the clones?— written by Hinoe 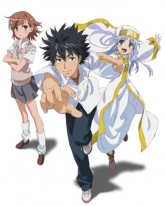 Based on a light novel series by Kamachi Kazuma, illustrated by Haimura Kiyotaka.On a transfer from England to Japan the The Book of the Law has been stolen. This is all the more disturbing since deciphering this book supposedly spells the end of the Roman Catholic Church, and thus destroys the equilibrium of power in the world. To make matters worse the nun, Orsola Aquinas, who recently discovered a way to decipher the book, has been kidnapped...At the Academy City the Daihaseisai, a sports festival, is underway. This opportunity is used to trade the Stab Sword — a spiritual weapon capable of killing Saints with one blow. But as it turns out the actual sword in question is far more dangerous...— written by foo2