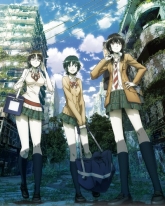 Based on Inoue Tomonori's Coppelion science-fiction military action mangaThe story is set in 2036, after radioactive contamination from a nuclear accident has put Tokyo under a blockade. Three high school girls have been sent to this dead city. Thanks to genetic engineering, the three girls have been impervious to radioactivity since birth. They form a special forces unit, codenamed Coppelion, in the 3rd Division of Japan's Ground Self-Defense Force.Note: The first episode premiered at Japan Expo in Paris and Anime Expo in Los Angeles. The regular TV broadcast started on 02.10.2013.