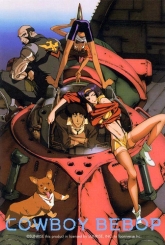 The year is 2071 AD. With the systematic collapse of the old nation-states, a mixed jumble of races and peoples were driven out of their terrestrial Eden and spread to the stars, taking with them the now confused concepts of justice, freedom, violence, and love. New rules were established, and a new generation of bounty hunters came into being. People referred to these bounty hunters as cowboys.Meet Spike Spiegel and Jet Black, a drifter and a retired cyborg cop who have started a bounty hunting partnership. In the converted ship The Bebop, Spike and Jet search the galaxy for criminals with bounties on their heads. They meet a lot of interesting characters, including the unusually intelligent dog Ein, the bizarre hacker child prodigy Ed, and the voluptuous and vexing femme fatale, Faye Valentine.Source: AnimeNfoNote: Originally aired on TV Tokyo, but after 12 episodes the show was cancelled due to the violence portrayed in the Cowboy Bebop world and violence in Japanese schools. The final and also the 13th episode on TV Tokyo was a compilation episode where the characters provide a philosophical commentary and end with the words: This Is Not The End. You Will See The Real Cowboy Bebop Someday! Four months later, WOWOW started to broadcast all 26 episodes of Cowboy Bebop. The ordering was different with completely new episodes mixed in between episodes previously broadcast on TV Tokyo, including a new episode 1.