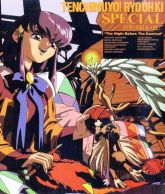 A few days after Kagato is defeated everything returns to normal. Ryouko finds Mihoshi and Sasami reading shoujo manga, which Sasami mistakes as guides on how to win a boy's heart... Earth style. So Ryouko decides to try out the ideas from the manga to win over Tenchi. But Aeka finds out what her rival Ryouko is doing and tries to take advantage of the same method. Naturally, the results are less than satisfactory for all involved...

We have 2 of 2 episodes in one video!