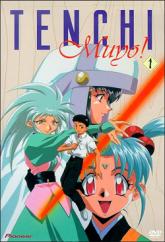 Tenchi has always been quite content with his life. He goes to school, helps out with chores, and practices swordsmanship with his grandpa. Things start to get crazy when Tenchi unwittingly releases a strange girl from a crypt. More complications arise when Tenchi discovers that he is actually descended from alien royalty. Soon, a whole bunch of girls are after him — a space pirate, two alien princesses, a space detective... just about every female who gets to know him, seems to fall for his charm. With notorious villains showing up, it is all too clear that Tenchi's content way of life is over!Note: Tenchi Muyo! Ryo-Ohki is an OVA consisting of, currently, two sets of 6 episodes each (OVA 1 and 2), a single-episode OVA (The Night Before the Carnival), and OVA 3 which is again a set of 6 episodes. Combined, there is a total of 19 episodes in this anime.