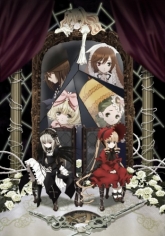 Sakurada Jun, a middle school shut-in receives a single letter. Yes or No. When Jun chose yes he met Shinku, but if Jun chose no, he would've gone on to college without ever meeting Shinku. Those two worlds were never meant to cross, but now they have connected!! Although the Jun who chose no has ventured out to overcome his shut-in nature, he can't find a place where he belongs. Shinku comes to this world where Rozen Maidens aren't supposed to exist. What will their new encounter bring?!Source: Crunchyroll