Requiem from the Darkness - dub anime 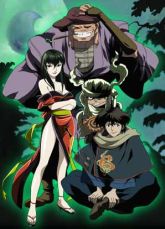 The scene is set in the Bakumatsu age, when the foundations of the Tokugawa government has began to sway. In the age where Darkness breathed and the existence of monsters were feared; an aspiring writer, Yamaoka Momosuke travels around the countries hoping to publish to the world his Hyaku Monogatari. There, he meets small time criminals such as Mataichi of Deception; Ogin of the Puppets; and Nagamimi of the Bird Calling.They are secretive gang, hired to solve cases that are buried in darkness. Searching out the criminal, using skilfull contrivances, they judge the human ego and bury one job after another; along with a mysterious sound of ringing bells and the word Go Koui Tatematsuru (probably means I shall do this in really old, refined Japanese)

Other official verified titles:
京極夏彦 巷説百物語 in Japanese
Requiem from the Darkness in Swedish, Finnish, French