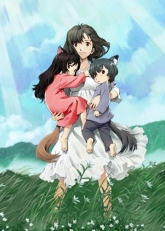 The theme of the film is the love between parents and children. The story covers 13 years and begins with a 19-year-old college student named Hana who encounters and falls in fairy tale-like love with a wolf man. After marrying the wolf man, Hana gives birth and raises two wolf children — an older sister named Yuki (snow) who was born on a snowy day, and a younger brother named Ame (rain) who was born on a rainy day.The four quietly lived in a corner of a city to conceal the fact that the children are wolf children. However, when the wolf man suddenly dies, Hana decides to move to a rural town far removed from the city.Source: ANNNote: The film received a world premiere at UGC Ciné Cité Les Halles in Paris, France on June 25, 2012. It premiered in Japanese theatres on July 21, 2012.