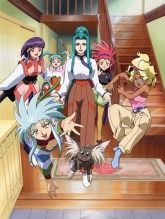 The mysterious Lady Tokimi dispatches the warrior Z to Earth in order to learn more about Tenchi and his connection to Washuu and Tsunami. Z is ordered not to lay a hand on Tenchi, but he may have his own agenda since he quickly sets about making trouble for our hero.Meanwhile, Tenchi's father Nobuyuki and grandfather Katsuhito come to the decision that it may be time for Tenchi to learn even more about his past and his Jurian heritage. And the arrival of a couple of new female residents to the Masaki household threatens to upset the balance and inflame the rivalry over Tenchi's already decidedly divided affection.Source: ANN