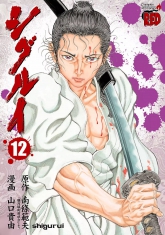 At the beginning of the Edo period (1603-1868), when people enjoyed a time of peace, Lord Tokugawa Tadanaga decides to hold a fighting tournament. In the past, matches were fought with wooden swords, but this time real swords will be used. The one-armed Fujiki Gennosuke and the blind Irako Seigen will fight each other in this tournament, even though both of them are disciples of Iwamoto Kogan — known as Japan's greatest swordsman. So begins the story of intertwining fates, conflict, and strange destinies. Note: It's SHOUNEN because it's published in Champion Red a shounen magazine for late teens+early 20ies