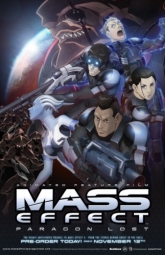 Early in the career of Alliance Marine James Vega, he leads an elite Special Forces squad into battle against a mysterious alien threat known as The Collectors. Stationed at a colony in a remote star system, Vega and his soldiers must protect the civilians from a ruthless invasion determined to capture the population for unknown purposes.Note: Initially screened at New York Comic Con on 13.10.2012. On 29.11.2012 it was also shown for one night only in several cities across North America. The DVD/BD was released on 28.12.2012.