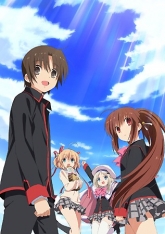 Based on visual novel developed by Key.The story of Little Busters! revolves around the main protagonist Naoe Riki, a young male high school student. When Riki was a child, his parents died, leaving him hopeless and depressed. He was saved by a group of three young boys and one girl his age, who referred to themselves as the Little Busters, a group dedicated to fighting evil and preserving justice.The leader of the group was Natsume Kyousuke, who had a younger sister named Rin. The other two members were Inohara Masato and Miyazawa Kengo, who were rivals despite being friends. They took Riki out and played together with him during his time of need, making him the fifth Little Busters member. In time, Riki enjoyed playing with them, and his grief over his parents gradually faded away. Now, Riki and his friends are in their second year of high school, except for Kyousuke who is in his third year. They still hang out together, and enjoy their school life.Source: Wiki