Gargantia on the Verdurous Planet (Suisei no Gargantia) - dub anime 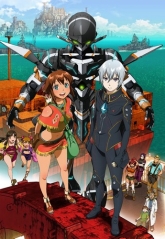 The story begins in the distant future in the far reaches of the galaxy. The Human Galactic Alliance has been constantly fighting for its survival against a grotesque race of beings called Hideous. During an intense battle, the young lieutenant Ledo and his humanoid mobile weapon Chamber are swallowed up into a distortion of time and space.Waking from his artificially induced hybernation, Ledo realises that he has arrived on Earth, the planet on the lost frontier. On this planet that was completely flooded by the seas, people live in fleets of giant ships, salvaging relics from the seas' depths in order to survive.Ledo arrives on one of the fleets called Gargantia. With no knowledge of the planet's history or culture, he is forced to live alongside Amy, a 15-year-old girl who serves as a messenger aboard the Gargantia fleet. To Ledo, who has lived a life where he knows nothing but fighting, these days of peace continue to surprise him.Source: ANNNote: The first two episodes received a special pre-airing at events taking place in four different film theatres. Furthermore 8.000 free copies of the first two episodes on Blu-ray Disc were distributed at the Anime Contents Expo on March 30 and 31. Regular TV airing started on April 7.

Other unofficial verified titles:
翠星のガルガンティア in Japanese
翠星上的加爾岡緹亞 in Chinese (Traditional)
Gargantia on the Verdurous Planet in French