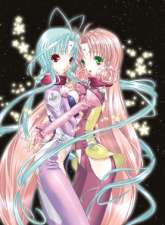 Based on a manga series by Peach-Pit, serialised in Dengeki Comic Gao! from March 2002 to December 17, 2005.A year ago, an alien spaceship crashed in Tokyo Bay. Since the so-called DearS — meaning "Dear Friends" — were unable to continue their space voyage, the aliens received Japanese citizenship. In order to study the Japanese language and customs, a homestay system was established.One day, high school student Ikuhara Takeya encounters a DearS girl wearing nothing but a blanket. Due to hunger and fatigue, she collapses on the street. Much to his embarrassment, he has no choice but to bring the alien he later names Ren, to his apartment, to stay for the night. But she insists on staying, referring to Takeya as "Master". Ren learns Japanese overnight due to her race's high intelligence and linguistic abilities, with some help from Neneko, Takeya's childhood friend and daughter of the apartment manager.Later, Ren goes on to attend Takeya's school, where she is mistaken for another DearS exchange student. However, trouble occurs when the real exchange student, Miu, appears.Source: AnimeNfo