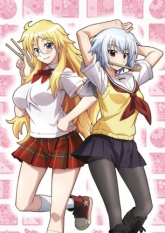 * Based on a light novel series by Asaura, with illustrations by Shibano Kaito. One day a poor freshman high school student named Satou You discovers a bento (boxed meal) on sale at half price at the local supermarket. Reaching thoughtlessly to grab the new-found treasure, he ends up unconscious on the floor of the store a moment later. He soon finds out that getting a half-priced bento means taking part in a fierce, no-holds-barred supermarket survival battle. Despite being warned to stay out of it, he continues struggling to hold his ground until the Ice Witch, Yarizui Sen — a second-year student and current president of the Half-priced Food Lovers club, invites him to join her club because she sees his remarkable strength. Finally You is able to compete with the other fighters, including his half-cousin Shaga Ayame. Note: The first episode received a pre-airing limited to 2000 viewers on NicoNico Douga on October 4, 2011. Regular television broadcast started on October 9, 2011.