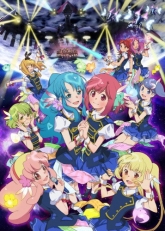 Stellar Calendar Year 0048Mankind has colonized space, and entertainment has been banned. The young girls sing radiantly, to bring love to the hearts of the people. — from introThe exceptionally talented understudies of the 77th audition have become an integral part of AKB0048, with both Chieri and Nagisa showing potential to become the new Centre Nova (group member taking centre stage), a role that has been banned ever since the disappearance of the last Centre Nova Acchan.Kanzaki Suzuko, also a 77th, never wanting to become a Successor, is still wondering what happened to all the previous Centre Novae, trying to find out who the mysterious Sensei-sensei actually is that writes all their songs and controls the fate of the group. Questions no member of AKB0048 is supposed to ask.If that was not enough, the general manager Katagiri Tsubasa not only reintroduces the role of Centre Nova again, but also the General Elections where the fans decide who is most popular, to become a Successor.— written by foo2Note: The first episode received an early screening at a special event at Akihabara UDX Theatre on Saturday, December 22. Participants were chosen through a lottery held between applicants on the anime's website. Additionally a simultaneous live screening was held by video sharing website NicoNico Douga. Regular television broadcast started on January 6, 2013.