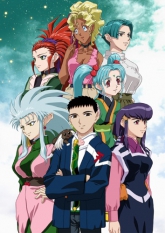 The entire Jurai and Masaki family is in a celebratory mood as Nobuyuki and Rea are finally tying the knot! In the days leading up to his father's wedding, Tenchi reunites with those he met throughout his journey as well as gets acquainted with some new family members. Though this is a blissful time where everyone is finally together, there is one major bump in the road: Rea holds a major secret that will change the fate of her future child and disturb the balance of the Masaki family. [Written by MAL Rewrite]