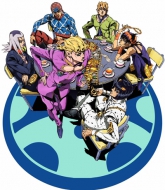 Keep Your Hands Off Eizouken!

* Based on an adventure school life seinen manga by Oowara Sumito. Asakusa Midori wants to create an anime, but she's too disheartened to make that first step by herself. But by pure chance, she meets Mizusaki Tsubame, an up-and-coming socialite secretly dreaming of becoming an animator. Together with Midori's money-loving best friend Kanamori Sayaka, the energetic trio slowly work towards making their "ultimate world" a reality! Source: M-U