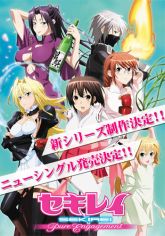 Based on the seinen manga by Gokurakuin Sakurako, serialised in Young Gangan.In Tokyo in the year 2020, Sahashi Minato has failed the college entrance exam twice, is awkward around women, and unemployed. One day, Minato meets a girl named Musubi, who literally falls from the sky.Minato soon learns that she is one of the Sekirei and he is her Ashikabi, a human with special genes make it possible to form a contract with Sekirei. This binds the Sekirei to him and allows them to use their full power in the Sekirei Plan, a dangerous and deadly competition organised by Minaka Hiroto, chairman and founder of the mysterious and powerful MBI Corporation. Minato finds out that being the partner of a beautiful girl is not all fun and games, especially when it turns out that an Ashikabi can have more than one Sekirei partner — and that is where the real trouble starts.Note: The first episode received an early airing on June 13, 2010 on Tokyo MX. Another early preview airing was held on June 19 in Ikebukuro Theatre Daiya during a promotional event with tickets sold in advance.