Hakkenden: Eight Dogs of the East 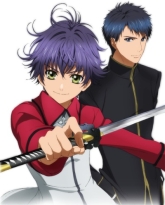 Five years ago, almost every villager of Ootsuka died due to a tragic plague. But mysteriously enough, three survivors: a girl and two boys, emerged. Now living in a church, the three live in isolation, hidden from those who may seek to find them. Shino, one of the survivors, has control over the power of Murasame, the blade of life. But when the imperial church seeks to take the Murasame for themselves, their peaceful life becomes a thing of the past...