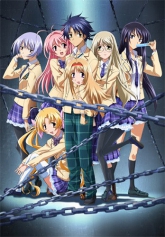 * Based on a visual novel developed by 5bp and Nitroplus for the PC. Takumi, a troubled young man, struggles to distinguish reality from his delusions, while being pursued by the perpetrator of a series of bloody murders — or so he believes. His travels take him in and around Shibuya, Tokyo and his adventures bring him in contact with various scientific themes such as the concepts of matter, antimatter, and the Dirac sea.

The boss of a territory in the demon world, Staz, happens to be a vampire, but has little interest in human blood. His true obsession lies with Japanese culture instead; meaning manga, anime, music and games. So when he learns that Yanagi Fuyumi, a Japanese teenage girl, accidentally wanders into his territory, he cannot contain his excitement. However, while Staz deals with an intruder on his turf, the oblivious Fuyumi is killed by a monster and becomes a wandering ghost. The disappointed Staz vows that he will find a way to bring Fuyumi back to life. But this turns out to be very much more complicated than he had ever expected.

Aesthetica Of A Rogue Hero

Other official verified titles:
はぐれ勇者の鬼畜美学[エステティカ] in Japanese
Aesthetica of a Rogue Hero in German

Ousawa Akatsuki, trapped by summoning magic in the Otherworld realm of Alayzard, has finally been proclaimed a hero for defeating the Dark Lord Galious and a rogue hero for his independent and philandering ways. After choosing to return to his home world through the Otherworld Gate, he is inducted into BABEL University, a place where returnees can learn to develop and use the abilities gained in the Otherworlds for the good of humanity. However, Akatsuki has brought back a secret in the form of his beautiful long-lost sister Miu who is actually the daughter of the Dark Lord he defeated. Furthermore BABEL harbours secrets regarding the true purpose of training returnees, and Alayzard's troubles with the defeated Dark Cult and the secrets they harbour are far from over.

Ef: A Tale of Melodies

Other unofficial verified titles:
ef - a tale of melodies. in Japanese

The anime once again tells two stories. The first story takes place in the past. Himura Yuu meets a girl, Amamiya Yuuko who seems to know him, but he doesn't know her. However, he soon remembers that she was a girl whom he knew from long ago. Yuuko then tells him something which he never knew. He was her first love since then, and her first love has not ended yet. The second story takes place in the present, just after the events of Ef - A Tale of Memories.. Kuze Shuuichi meets the cousin of Asou Renji, Hayama Mizuki and spends a lot of time with her. Unknown to Mizuki, Kuze had contracted a fatal illness and has little time left to live. Kuze had decided to break all romantic ties, but things go bad when Mizuki tells him that she loves him. Source: ANN

Several hundred years ago, humans were nearly exterminated by titans. Titans are typically several stories tall, seem to have no intelligence, devour human beings and, worst of all, seem to do it for the pleasure rather than as a food source. A small percentage of humanity survived by walling themselves in a city protected by extremely high walls, even taller than the biggest of titans. Flash forward to the present and the city has not seen a titan in over 100 years. Teenage boy Eren and his foster sister Mikasa witness something horrific as the city walls are destroyed by a super titan that appears out of thin air. As the smaller titans flood the city, the two kids watch in horror as their mother is eaten alive. Eren vows that he will murder every single titan and take revenge for all of mankind. Source: MangaHelpers Note: The last episode received a pre-airing in Tokyo, Marunouchi Piccadilly 1 theater. TV broadcast took place after midnight, a few hours later.

Ef: A Tale of Memories

Based on the visual interactive novel by Minori, featuring character designs by Nanao Naru. Hirono Hiro is a poor high school boy who draws shoujo manga for a living. One cold Christmas night after meeting a mysterious woman in a church, telling him that he is going to meet someone he has to meet, his bike gets stolen by another strange girl. He runs after her and finds her collapsed on the street. Her name is Miyamura Miyako and her bag was stolen by a man on a motorbike. Soon after, they start hanging out together, enjoying high school life. Miyako falls for Hiro pretty quickly but finds a rival in his childhood friend, Shindou Kei, who has been managing Hiro's life for quite some time.