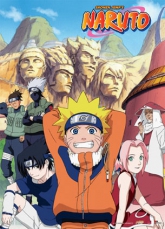 Naruto closely follows the life of a boy who is feared and detested by the villagers of the hidden leaf village of Konoha. The distrust of the boy has little to do with the boy himself, but it's what's inside him that causes anxiety. Long before Naruto came to be, a Kyuubi (demon fox) with great fury and power waged war taking many lives. The battle ensued for a long time until a man known as the Fourth Hokage, Yondaime, the strongest ninja in Konoha, fiercely fought the Kyuubi. The fight was soon won by Yondaime as he sealed the evil demon in a human body. Thus the boy, Naruto, was born. As Naruto grows he decides to become the strongest ninja in Konoha in an effort to show everyone that he is not as they perceive him to be, but is a human being worthy of love and admiration. But the road to becoming Hokage, the title for the strongest ninja in Konoha, is a long and arduous one. It is a path filled with betrayal, pain, and loss; but with hard work, Naruto may achieve Hokage. Source: ANN Note: Starting from 29.04.2009 a rerun of Naruto began airing in HD with the changed title Naruto: Shounen Hen (ナルト 少年篇) featuring new openings, endings and 2D/3D effects. It included new scenes and most of non-canon material was cut to make it more faithful to the original manga.

My Next Life as a Villainess All Routes Lead to Doom! - dub anime

* Based on a light novel series written by Yamaguchi Satoru and illustrated by Hidaka Nami. After hitting her head particularly hard one day, Duke Claes' daughter, Catarina, suddenly recalls all the memories of her past life: that of a teenage Japanese girl. Just before her untimely death, this girl recalls playing an otome game... that is exactly like the world she's living in now! She is now Catarina Claes, the antagonist of the otome game, who nastily hounded the protagonist until the end. Knowing all the possible outcomes of the game, she realizes that every single possible route ends with Catarina being murdered or exiled! In order to avoid these Catastrophic Bad Ends, she has to use her knowledge of the game and her own wiles, starting with breaking off this engagement with the prince... Will Catarina survive while making her way through this world, where bad flags trip at every turn? Find out in this reverse-harem rom-com, led by everybody's favorite villainess! Source: J-Novel Club

Read more: My Next Life as a Villainess All Routes Lead to Doom! - dub anime

In this brand-new adventure, some Class 1-A students are sent to hone their survival skills at a training course. Having yet to receive their provisional licenses, they're eager to cut loose and have a little fun. They quickly discover that the danger they face is no simulation! It's going to take their combined training, teamwork, and quick thinking if they're going to pass this assignment! Source: funimation

* Based on an action role-playing hack and slash video game developed and published by Capcom. The story follows a man's journey seeking revenge on a dragon who stole his heart. On his way, the man is brought back to life as an 'Arisen'. An action adventure about a man challenged by demons who represent the seven deadly sins of humans.